A change in our household

It has been three months since my last post! We spent three weeks in September on a 7,000 mile trip out West. We went to Ogden, UT (the Great Salt Lake) Crater Lake, Lava Beds National Monument, Lassen Volcanic National Park, drove through San Francisco, drove on the Pacific Coast Highway, toured Hearst Castle, stopped to visit my aunt in Fresno, Yosetime National Park, drove the pass over the Sierra Nevada, saw Mono Lake, went to Death Valley, Las Vegas, Pipe Springs National Historic site, went shopping in Gallup, NM and Taos. It was quite a trip.

We started this trip on a sad note: just before leaving we put down our old black cat Thunder. She had been taking medicine for hyperthyroidism for about two years. She had little interest in eating. We would tempt her with different varieties of canned food and put the medicine in. She would like something then didn't want it anymore and we would try a different variety. She has been deaf for several years and her primary interest was lying on our laps and napping. She got very skinny and stopped grooming herself and sometimes her hind legs would give out.

For our trip last year we had someone come in to feed and give her the medicine everyday. This year she was worse and there was a fear that she would die while we were gone. So the morning we left we went to the vet, said our goodbyes and watched her as she died.

Thunder came to us at our previous house. The summer of 1992 was a wet one. One day Don discovered a black stray kitten sheltering in the van engine compartment. She knew soft touches. We fed her and after a short while agreed to adopt her. But before taking her inside to meet our other cat at the time (Blitzen), took her to the vet for a check up. This little kitty had worms, an eye infection and was pregnant. All of that was eventually taken care of. She came to us with a kinked tail and a fang bent out of place. So she had quite a time in her short life before coming to us!

Thunder tore up the old house pretty good with her claws and had an independent attitude. Unlike Blitzen who didn't seem to get enough human contact (she was a stray too). When we moved to our current home, Thunder got declawed and she also had less of an independent attitude and Don's lap was her place. She outlived three other cats: Blitzen, Brillion and Gracie.

All of our cats were special in their own ways and all had their stories. Thunder's finally came to an end.
Thunder, 1992-2011 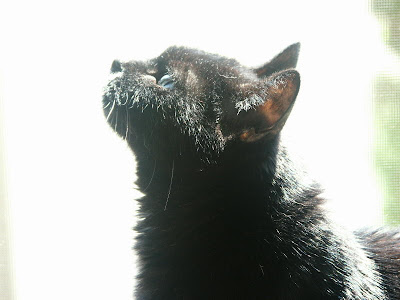