The Iconography of The Times of the Day

Doing artworks in a series has been common since the Renaissance. Not only just the Times of the Day, but also the Four Seasons and the Ages of Man.

We are more familiar with the expression of these concepts in music (perhaps because this music is still played and recorded for current listening). Fans of classical music are familiar with Vivaldi's Four Seasons, Respighi's The Pines of Rome, Copeland's An American in Paris and more recently the Moody Blues' Days of Future Passed.

In this series of Gericault's Times of the Day, the artist follows the current accepted moods for each picture.

In the first, Morning: Landscape with Fishermen, the colors are cool with early dawn light and four fishermen are pushing off their boat for a day of work. The craggy mountain in the middleground and the two exotic trees in the foreground are quite strange looking. The mountain certainly couldn't hold together for very long in a temperate climate and the palm tree fronds never looked like any palm I had seen in life or photographs.

In Noon: Landscape with a Roman Tomb, the imagery is more sinister. There are storm clouds appearing from the left, blocking out the blue sky. In the foreground a family is begging a boatman to take them across the river from the island with the tomb and gibbet before the storm breaks.

This picture is more effective than Morning since there are no odd-looking mountains and trees to distract the modern viewer. Noon pictures at this time always feature storms or other bad weather since the bright, top light is often flattening and difficult to compose with according to the ideas of that time. There are modern paintings that take advantage of the bright, top light and the resulting dark shadows for pictorial effect.

Evening: Landscape with an Acqueduct is the best of the lot in my opinion. The raking evening light illuminates the buildings, river, trees and the naked men swimming in the foreground. It has a peaceful, carefree mood.

If this series was finished Night would be a scene of a storm at sea and a drowning. Gericault had done some smaller paintings of the Deluge and several versions of the Tempest showing a drowned woman and child on the seashore. The Biblical Deluge has been a perfect opportunity for painters to have a history painting with lots of naked men, women and children in distress, the moral being the wrath of God on wicked people.
Surprisingly these examples of the Deluge and the Tempest have less emphasis on the human figures and more on the stormy seascape they are in. Despite of his love of the human figure, Gericault was trying for emotional impact through the landscape than with the people.

Despite Gericault's early death, he has made his mark on Art History, though these landscape paintings would be secondary to his paintings featuring animals and humans. I have been to the Metropolitan Museum of Art twice for two day visits, I don't remember seeing Evening: Landscape with an Acqueduct. The painting is very large (8.2 feet by 7.2 feet) but it must not have made any impact on me when compared to so many other great works of art on display. What did impress my husband and I was George Washington Crossing the Delaware. We are very familiar with reproductions in books and prints but were never aware of how huge it is!
This does give an idea of why history painting had high standing for so long. 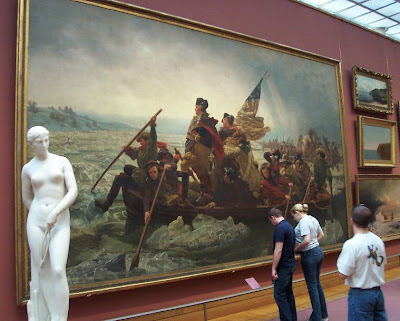