A review of winter drawings

Spring is almost here! Here in LaCrosse most of the snow has melted and I actually hung laundry outside to dry. But being March, it can snow before the month is out. My policy is to draw pictures in season so soon I will look to spring themes for inspiration.
Here are the drawings I have done these past few months:
"Leaves in Snow", 12" x 16", colored pencil on tan paper. This is another addition to my ongoing "Leaves Series". This particular drawing was based on photos taken Thanksgiving day 2007 at my husband's cousin's back lot in Coon Rapids, MN. After eating I went out and took lots of photographs. I also did it again in 2008, but there was no snow then but I took many photos of leaves on the ground with the setting sun shining through them, many, many possibilities! 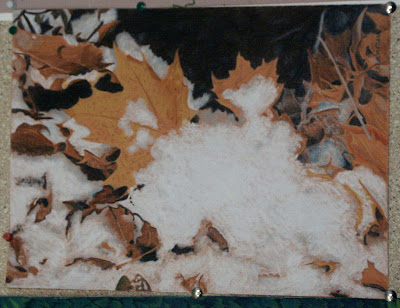 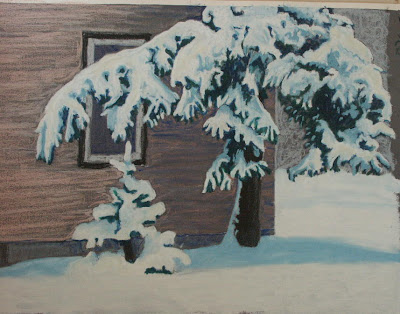 "Heavy Snow", 18" x 24", Oil pastel on purple-gray colorfix paper. This house and trees were just across the street from my house. There was a heavy March snowfall one day and I went around the neighborhood taking photos. This house and trees are now gone to make a parking lot for the catering business next door. The little tree was adopted and replanted elsewere.
"Nebraska Winter", 14" x 26", "Snow Storm", "16" x 26", Oil pastel on blue colorfix paper. This drawing and the one below it are based on photos taken in December 2007, my husband and I were returning from our trip to the Southwest on I-80 through Nebraska. The weather was horrible! There was an ice storm that kept icing up the windshield of the car. I took a few photos before it became too dark and another pair of eyes was needed to watch the road. Despite taking only a few photos, they became the inspiration for two drawings. 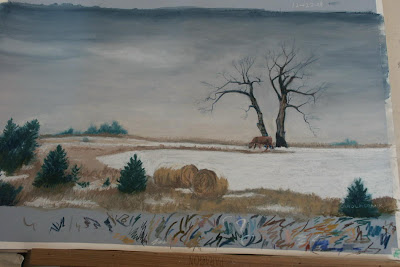 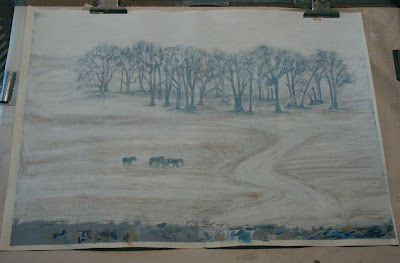 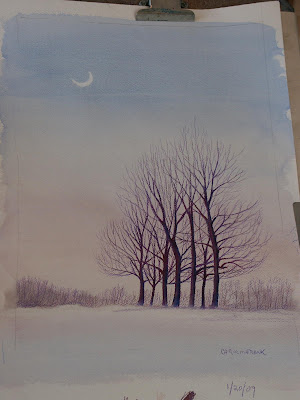 "Young Trees", watercolor and colored pencil. This drawing was featured earlier in this blog and was based on a photo taken the evening of Christmas Day 2008. 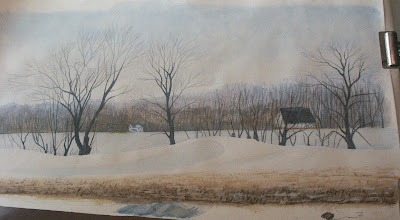 "Mower County Winter", watercolor and colored pencil. Last March about this time, we went to visit my parents. Mom and I drove to Albert Lea and around Freeborn and Mower Counties. I took lots of photos. Two of them became the basis for the next two drawings. 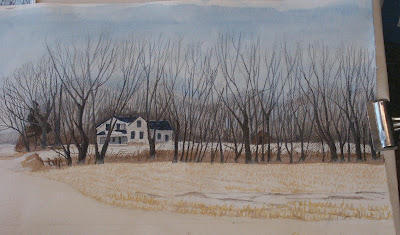 "Late Winter", watercolor and colored pencil.
Posted by Carol at 11:07 AM