We came back from our trip over a week ago. I am catching up with business. The pump we ordered for use in the watergarden over the winter never came so Don cancelled the credit card charge for it. It was ordered early in October and never came and the seller never responded to inquiries. So another one, from another seller, is on order. The big pump we use during the summer (3800 gph) is much than is needed for winter use.
We went east on this trip, all the way to Hilton Head Island, SC and Savannah, GA, by way of the Great Smoky Mountains National Park and Asheville, NC. We toured several Civil War coastal forts (Fort Sumter, Fort Moultrie in Charleston, NC and Fort Pulaski, near Savannah, GA), The Battleship North Carolina in Charleston, the Hunley exhibit in North Charleston, Tybee Island Lighthouse, Trinity Cathedral and the South Carolina Statehouse in Columbia, SC. The aircraft carrier Yorktown is at Charleston, but since we have already toured a similar carrier, Intrepid in NYC, skipped it.
Yes, I did managed to also tour the Asheville Art Museum and spent money in their gift shop and made the rounds of art galleries in Bluffton (near HHI) and Asheville. However, my legs are not very good and negotiating the sidewalks in downtown Asheville wasn't easy for me. While in Tennessee, we also did the arts and crafts drive just outside of Gatlingburg, TN and ate in a tea room! The food was good and met Don's approval. (He even liked the Wild Plum tea).
Another highlight was touring Biltmore house in Asheville. Though I had to walk, (the wheelchairs weren't big enough, and couldn't go everywhere) it is a fascinating place and the staffing courteous and helpful.
On the return trip we stopped at Dayton, OH for more time at the Air Force Museum. Last year we spent two and a half days there but Don still haven't seen everything. I didn't mind since the scooters there are very nice and it was an opportunity to fill up the sketchbook I was keeping on this trip. The light levels were low and made some of the displays hard to read, wish I had thought to bring a headlamp like Don did. We did this on November 11, when G. W. Bush was there. We arrived just before 2 PM and the place was filled with uniforms of all kinds, civilians in formal dress and the city police bomb squad and dogs were there just in case. Until 5 PM some areas were off limits but then the museum stayed open until 8 PM. We left at 7:30. The following day was a ten hour drive back to La Crosse.
Home, I looked over the drawing I did just before leaving on this trip and made some slight changes. 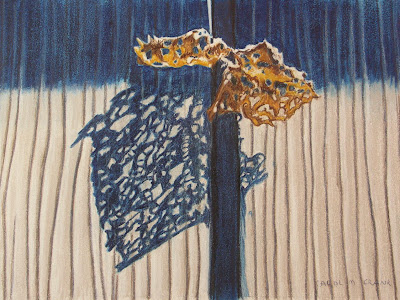 I immediately did another one similar to it but done with Derwent Drawing pencils on fawn gray Stonehenge paper. 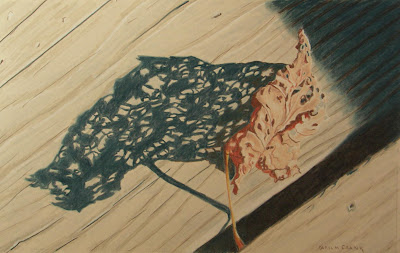 The fall scenery in the Smoky Mountains was wonderful so I did an oil pastel based on a photo I took. Done on dark blue Colorfix paper, 18" x 18". 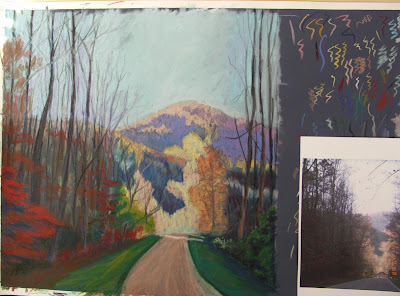