Winter Almost Over! Getting those winter themed drawings done.

This March so far has been a typical March: Snow, then melting, maybe more snow, rain instead. Just waiting for that last gasp snow storm.
Don and I went for a drive one Sunday and surprised a bald eagle feeding on roadkill. He wasn't too shy, just flew up into a nearby tree and waited for us to move on. I took some photographs and used one as a basis for a drawing.
Eagle in Tree, Derwent Drawing pencils on gray Stonehenge paper, 15" x 12". 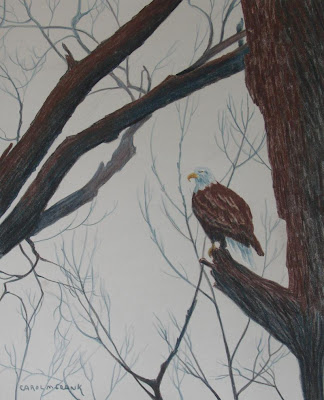 For a change I did a couple of oil pastels on primed paper. Over the Hill, oil pastel, 13" x 26" was also based on photographs taken during a recent drive. The format is and unusual 1 : 2. While cropping the source photo the picture just didn't seem right in a more conventional format.

Late Afternoon Glow, Oil pastel, 18" x 24", is more conventional in dimensions but just as colorful. Oil pastel is an opportunity to use subjects with little detail but lots of color. It also uses more larger arm muscles than the fine finger muscles used in controlling color pencils. 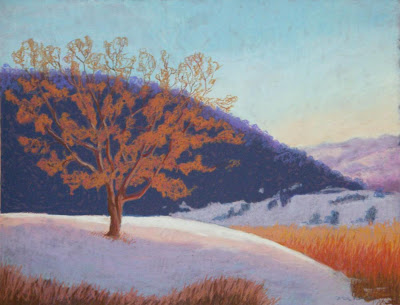 My current work in progress is done with oil-based color pencils on primed paper. I could count on the fingers of one hand the number of drawings done in oil color pencil. Coulee Pine Tree, oil color pencil, 11.75" x 18" 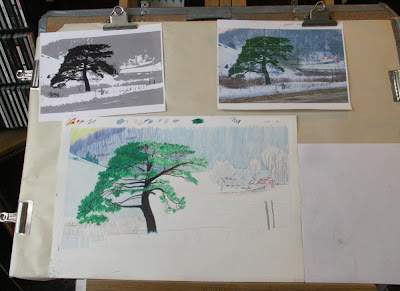 The melting snow has revealed the garden beds and I am wondering when the plastic sheeting should be put on to pre-warm the soil for early planting. The catering business next door has been doing remodeling all winter with reshingling, and an addition put on in back. The roofers had to come into our back yard to work on the south side. I pruned back the rose bushes radically last fall in anticipation of this and looking forward to lots of new growth. The watergarden has a leak and we will have to reseal the liner joining between the old and new watergarden sections. Hopefully that won't be too much a bother! (Knock on wood!)