March has been doing a lot of transitioning from winter to spring. On March 23 there was heavy snowfall here in La Crosse. Here is the view from my studio window. Then it warmed up, melted off then snow again on April 1st! The temperatures are very nice now; up to 70 degrees Fahrenheit on Saturday. Last weekend a major thunderstorm system went through spawning tornados and hail, fortunately not in La Crosse itself. The weather warning siren went off, prompting us to turn on to the Weather Channel and finding this area the center of attention with at least five tornados sighted on the ground in the three state area (Iowa, Minnesota, Wisconsin). 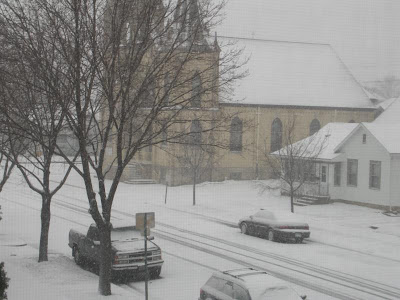 I finished Coulee Pine Tree and posted it on Wet Canvas for critique. It was suggested that the tree was too dark for the scene and the forground grasses where unnecessary. So I erased back the green on the tree, lightly went over it with a dull red colored pencil and erased back the yellow sky in the upper left corner and put in light pink. Redoing the foreground was a major undertaking. I removed as much color as possible with tape and poster putty, then erased with a soft white eraser and picked up the crumbs. The erased area got two light coatings of white opaque watercolor. Then I colored in with blue and white colored pencils, dissolved them with Odorless paint thinner and smoothed the layers out with a piece of wool felt. If you look very carefully at the actually drawing, some of the original grasses faintly show through. I also wasn't careful enough in layering the white watercolor and had some hard edges that showed up when colored over. This has been a learning experience and an idea what to do next time major changes are needed. 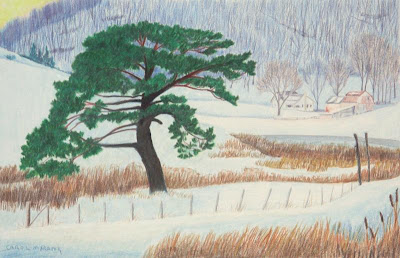 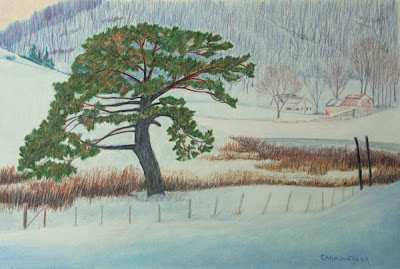 For a change I did a drawing in Derwent Tinted Charcoal. The subject is an old apple tree at my parents. The source photos where taken the previous March. Old Apple Tree, 16" x 20", tinted charcoal on gray charcoal paper. 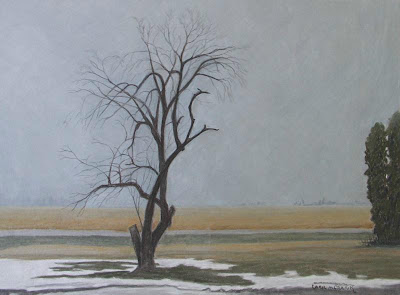 The remodeling at the catering business next door isn't done yet! The original windows that where covered up when it was resided about 25 years ago are now opened up with new windows. I was concerned for our privacy and the window installers said there will be stained glass inside. That should be beautiful at night. I will have pictures of that later this summer. 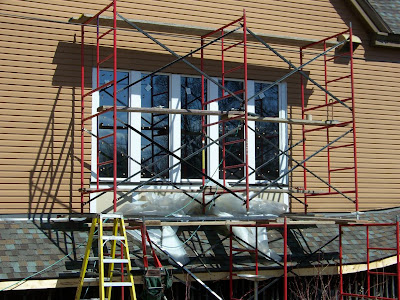 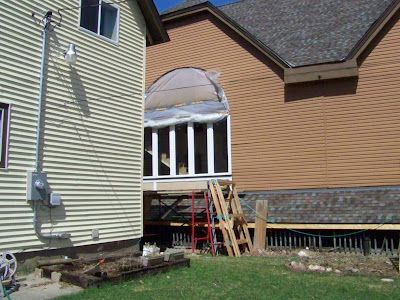 Gardening is coming along, I had covered a bed to warm it up faster and last week planted kale, spinach, bok choi, chard, red onion sets, radishes and carrots. The radishes have sprouted. I still have all the white onions from last year and will harvest them before the rest of the seeds are planted. 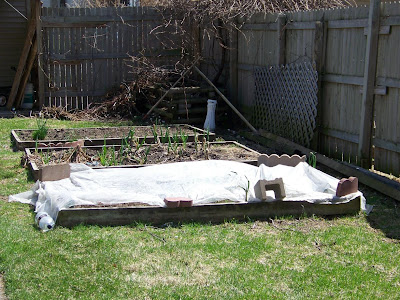 The watergarden has a leak and will need to be drained and the join between the old and new sections redone. That won't happen until next month. 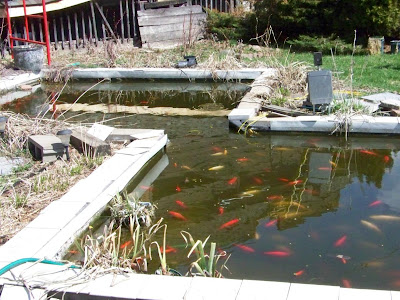