This month just can't make up its mind. Nice weather, then snow. On April 19 there were at least two inches of snow here at the house, other places in the region got more! Maybe it will settle down and leave like a lamb. Currently there is one of those April showers that bring May flowers.
I did get some yard work done: cleaned up the flower bed near were the large tree was taken out last fall, picked up and sift the white rocks that where on the path through that flower bed (the new tree will be put where path was), cleaned out more flower beds and remulched. Still more, always more! I wish the window installers at the catering business would finish. Their scaffolding is over my rose bushes.
I needed change from all the tree drawings that I have been doing, they were starting to look alike. In my "will do someday" files is a photograph of a yellow rose "Topaz Jewel". We have two bushes of this variety and they have spines like cat claws. Though not quite seasonal, it is a nice change of pace.
Topaz Jewel, 18" x 24", oil pastel
Stage 1, I gridded the white primed colorfix paper and did the basic drawing with yellow and green pastel pencils. and blocked in the background with blue-violet. 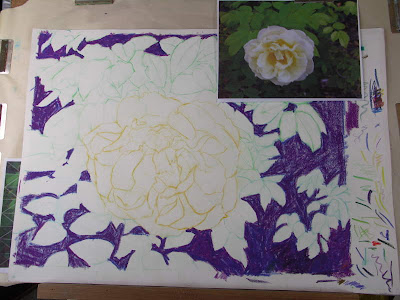 Stage 2: I finished blocking in the background and leaves with my cheaper, harder oil pastels and just starting with the petals. 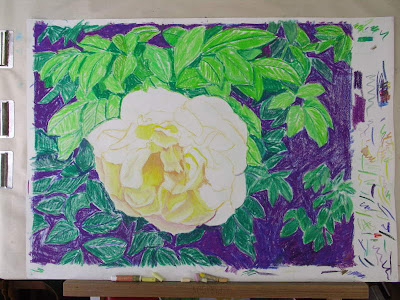 The finished drawing: this is when the nice, expensive Sennelier Oil pastels are used. The colors are toned down from the garish under painting. To reduce the brightness the leaves were gone over with a complementary red-violet color. 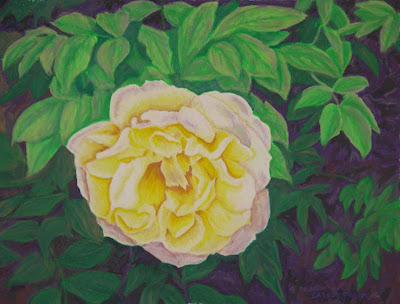 As relief from the large, demanding flower oil pastel drawing, I did a smaller, quicker drawing in a medium I rarely use: Conte crayon. The subject is my late Gracie cat. She had to be put down last fall. She was a faithfull companion in the studio. For this drawing I used a tan background to stand in for the bits of light brown fur mixed in with the gray and white tabby stripes. Gracie was what is know as a grey or dilute tortieshell cat. A regular tortie has black, dark brown and red fur with much more dramatic contrast. I did this drawing with out gridding first. 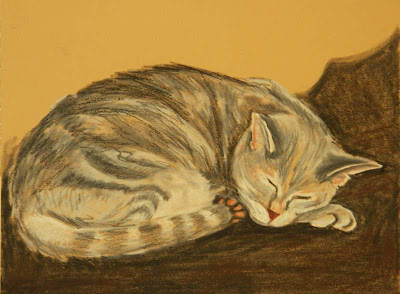 For even a further change of pace I did two drawings just in graphite pencil. The dead tree is from an old slide I took many years ago at my parents. The barn was a color photograph with little contrast. I did a lot of "pruning" on the foreground trees to the barn could be seen better. 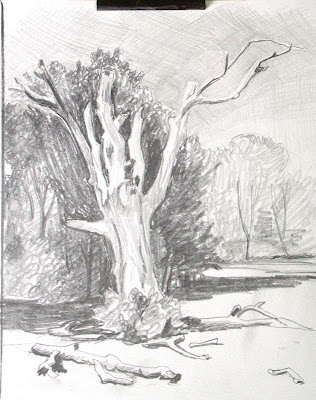 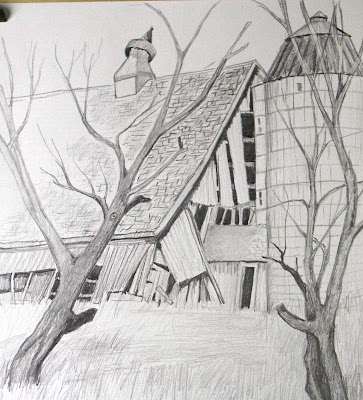